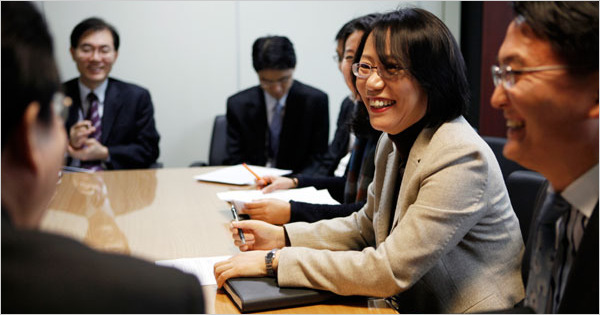 SEOUL — When Kim Hyo-eun joined the South Korean Foreign Ministry in 1992, its personal data form listed “wife,” but not “husband,” in the section where new diplomats provided information about their spouses. That was hardly surprising: at the time, few women had ever taken, let alone passed, the foreign service examination.

“The year I took the exam, an unprecedentedly large number of women passed it — three — so it made news,” said Ms. Kim, who is now director of the ministry’s climate change team.

Fast forward to 2010. Kim Sang-jin, head of the ministry’s personnel management team, sees a literal change in the face of South Korean diplomacy. Over the past five years, 55 percent of the 151 people who passed the highly competitive test — the main passageway into the country’s diplomatic corps — were women.

The situation at the Foreign Ministry is emblematic of what is happening in other government departments. Last year, 47 percent of those who passed the state examination that selects midlevel officials to be groomed for senior posts in agencies other than the Foreign Ministry were women. In 1992 it was 3.2 percent.

So many women have entered public service in recent years that, in 2003, the government revised its quota system. In 1996 it had begun mandating that at least 30 percent of new hires in all government departments except the police and military be women. Now, because so many women have succeeded in competing for these jobs, it is applying the minimum 30 percent quota for men as well.

“Managers come to us asking for men, complaining that they have too many women in their office,” said Mr. Kim at the Foreign Ministry. “There aren’t enough men to go round. They’re in short supply.”

The recent surge of women in the public sector is an outcome of government efforts to expand democracy after decades of military rule, to combat economic stagnation by bringing more well-educated women into the paid work force and to check the country’s plummeting birthrate, attributed in part to the difficulties South Korean women face trying to combine careers and motherhood.

But it is also reflects the daunting obstacles women continue to face in the private sector.

In South Korea, the four largest conglomerates — Samsung, Hyundai, LG and SK — dominate the economy. Women hold less than 2 percent of seats on their boards. There are almost no female executives at South Korean banks.

Despite having the world’s 13th-largest economy, South Korea ranked 115th out of 134 countries in the World Economic Forum’s 2009 index of gender equality.

Compared with other industrialized countries, highly educated women are poorly represented in the paid work force in South Korea, where Confucian-influenced tradition continues to give married women overriding responsibility for managing the household and raising children.

In 2007, only 60.9 percent of women with college or graduate degrees were employed, the lowest rate among the 30 countries in the Organization for Economic Cooperation and Development. (The O.E.C.D. average was 79.9 percent.)

Women who do work outside the home tend to be clustered in low-level service and manufacturing jobs — a fact that had consequences in the recent recession. In the United States and Europe, more men than women lost their jobs. But in South Korea, a whopping 90 percent of those made jobless were women, partly because they made up so many of the part-time and contract workers who have proved easy targets when it comes to cutting costs.

In January, just over 45 percent of working-age women were employed, compared with almost 70 percent of men. Women bring in only 52 percent of what men get in wages, according to the U.N. Development Program’s gender empowerment measure, which last year ranked South Korea 62nd out of 109 countries in terms of income and of political and economic participation and decision-making.

Faced with all this, it has been the government that has led the way to expand women’s rights. Since the mid-1990s, it has enacted laws addressing issues like sexual and domestic violence.

It has also revised more than 300 existing laws to eliminate gender bias since 2005, the year the Constitutional Court threw out provisions in the Civil Code that said that only men could be the legal head of household and that children must take their father’s surname, thus toppling centuries-old tenets of Korean society. Women’s rights advocates still mention this ruling as one of their greatest coups.

“Our strategy has been to change the laws and institutions first so the rest of the society can catch up in changing attitudes and culture in favor of gender equality,” said Chung Bong-hyup, director general at the Ministry of Gender Equality, which was established in 2001.

Women now account for 10.8 percent of midlevel managerial posts in the government, although the percentage declines sharply in the upper echelons.

In Parliament, where the first female deputy took her seat in 1949, women still comprise a minority — 14 percent — but they include some of the most influential voices. President Lee Myung-bak’s biggest rival now is not the opposition parties but a woman in his own party: Park Geun-hye, who leads a band of male legislators who often rebut Mr. Lee’s policies on a cue from her.

“The biggest merit of government jobs for women is that we don’t face discrimination there,” said Park Ja-hye, a graduate of Seoul National University who has been preparing for the foreign service exam for the last couple of years. “Private companies don’t have great expectations from their female employees. They seem to hire them just for display, to show that they care about gender equality.”

Ms. Park, 27, said she had known no discrimination until she graduated in 2006 and began applying for jobs. At home, she was raised by a mother who was trained as a pianist in Germany and a father who worked at an American company. At school, she excelled in exams and classroom presentations, winning acceptance to Seoul National University’s prestigious business school.

Its diploma can open doors at nearly any top corporation — except for female graduates, some of whom say they were rejected as many as 20 times in job applications.

Some have responded by seeking positions abroad or cramming for the government exams.

Ms. Park’s own brief stint at a private company after graduation was a rude awakening to the reality that many highly educated, ambitious young women graduates confront here. Unlike their mothers, who usually remained homemakers even if they held university degrees, women of Ms. Park’s generation are expected to hold paid jobs to supplement their future husband’s income to meet rising living costs.

But male colleagues tend to sideline women who do not join late-night drinking sessions, a traditional way of building office camaraderie. Managers consider them unreliable, suspecting that they might quit or lose their focus on work once they marry. Maternity leave is seen as an impediment to becoming a senior manager.

“Women flock to government exams, not just because they want to, but also because they have no alternative,” said Ms. Park, who has returned to her university, but this time to its graduate program in international studies with an eye toward the Foreign Ministry or international organizations.

Of all the government agencies, women have made the greatest inroads in the Foreign Ministry, partly because of the perception that its international outlook makes it a more hospitable environment for women to advance.

“Working in the international field was a way out of the stifling male-dominated society” of South Korea, said Yoo Hye-ran, the only woman who passed the foreign service exam in 1989.

Two decades later, the young women who have followed in her path have bolder dreams.

Sun Ju-yearn, 25, was among the 23 women who passed the foreign service exam in 2008, when the passing rate of women outstripped that of men by two to one.