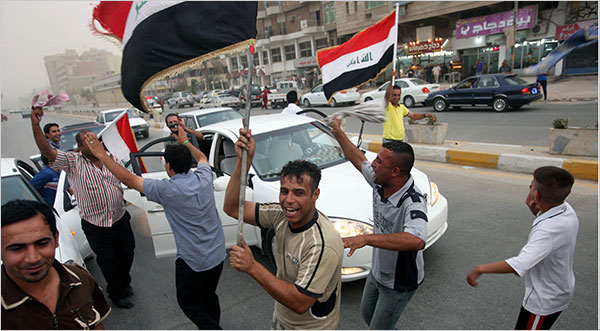 BAGHDAD — With parades, fireworks and a national holiday, the Iraqi government celebrated the final withdrawal of American troops from the country’s cities on Tuesday, trying to exploit a political milestone to trumpet what the prime minister called sovereignty from foreign occupation.

Even with a deadly car bombing and other mayhem marring the day — the deadline for the American troop pullback under a Jan. 1 agreement — Prime Minister Nuri Kamal al-Maliki seized on the occasion to position himself as the proud leader of an independent nation looking ahead to the next milestone, parliamentaryelections in January.

He made no mention of American troops in a nationally televised speech, even though 120,000 remain in the country and most had already pulled back from the cities in advance of the deadline. Rather, he focused his praise on Iraqi troops and security forces for their role in fighting the insurgency that developed under the occupation.

The hoopla, however, has rung hollow for many Iraqis, who fear that their country’s security forces are not ready to stand alone and who see the government’s claims of independence as overblown.

Many people stayed home fearing violence, and with reason. Late in the day, a car bomb exploded in a crowded outdoor market in the northern city of Kirkuk, killing at least 24 people.

Despite the bombing and several others in the last week, Mr. Maliki assured Iraqis that government forces taking control of urban areas were more than capable of ensuring security. “Those who think that Iraqis are not able to protect their country and that the withdrawal of foreign forces will create a security vacuum are committing a big mistake,” he said.

But in an indication of the dangers that remain, rhe American military announced on Tuesday that four soldiers had been killed in combat operations on Monday in Baghdad. It did not provide further details, pending notification of the soldiers’ families.

In the past few weeks, nationalist sentiments have spread within the Iraqi government and military, with officials all but boasting that they are ready to handle the security situation on their own.

Speaking as a military parade marking the event was held deep inside the heavily fortified Green Zone, Mr. Maliki took credit for ending the vicious sectarian fighting that exploded in 2005. The government, he said, “succeeded in putting down the sectarian war that was threatening the unity and the sovereignty of Iraq.”

Gen. Raymond T. Odierno, the American commander in Iraq, brushed aside the public remarks of many of Iraq’s leaders and people, saying that Mr. Maliki had personally thanked him on Monday night and again on Tuesday for the sacrifices of American troops.

“I do not get these negative comments from the political leaders that are in the government,” he said at a news conference at the American military headquarters at Camp Victory. “In my mind, I frankly don’t worry about those comments because I understand that we are working this together.”

Ordinary Iraqis generally welcomed the arrival of a day they long doubted would come. Although some worried that the security forces may not be able to control the insurgency, they were also relieved to have the Americans out of sight. Some said the American presence had given insurgents a pretext to stage attacks.

The American presence here is associated with better security in some places, but it is despised in others for its often heavy-handed security techniques, for creating traffic jams and for generally reminding Iraqis that they are not in control.

“It really is a sovereignty day,” said Balqis Eidan, a 30-year-old state employee. “I agreed with Maliki. It is a very important day in our history. But we are still worried about security. We hope that our forces will be able to handle security. The way will be a long one.”

In accordance with the security agreement, there were few American troops to be seen on Baghdad streets, and the Iraqi authorities stressed that they did not want to see them unless their help was requested. The American military has obliged, ordering soldiers to remain in garrison for the next few days to give the Iraqis a chance to demonstrate that they are in control.

The great majority of American troops withdrew before Tuesday and closed down their urban outposts, in some cases several weeks ago, and moved to central operating bases. At the request of the Iraqi authorities, Americans remain at a handful of urban outposts in Baghdad. There were still American armored vehicles to be seen on Tuesday near one entrance to the Green Zone and on the airport road.

The military parade in the Green Zone on Tuesday — at the official monument to the unknown soldier — was attended primarily by Iraqi reporters and dignitaries. The public could not reach it because of extensive security restricting access to the area. Several American news organizations were also barred, including two television news networks and The New York Times, on the grounds that they did not have the appropriate badges.

This seemed in part intended to signal that the Iraqi authorities were in charge. In the past most checkpoints were run jointly by Iraqis and Americans, and if a Westerner lacked the correct credentials, exceptions could be made.

Many of the celebrations on Tuesday seemed contrived. Police cars were festooned with plastic flowers, and signs celebrating “independence day” were tied to blast walls and fences around the city. On Monday night, a festive evening celebration in Zahra Park with singers and entertainers drew primarily young men, many of them off-duty police officers.

Some Iraqis were skeptical about the significance of the event, which the government called National Soveriegnty Day.

“There is no doubt this is not national sovereignty because the Americans will stay inside Iraq in military bases,” said Najim Salim, 40, a teacher in Basra. “But the government wants to convince the citizens that there is a withdrawal of foreign troops, although the government could not protect citizens in some cities in Iraq even with the presence of U.S. forces.”

The car bomb in Kirkuk exploded as the vegetable and poultry market was crowded with people shopping for their evening meal, The A.P. reported. Police and hospital officials said that in addition to the fatalities, about 40 people had been wounded, The A.P. said.