Dreaming of Splitting the Taliban 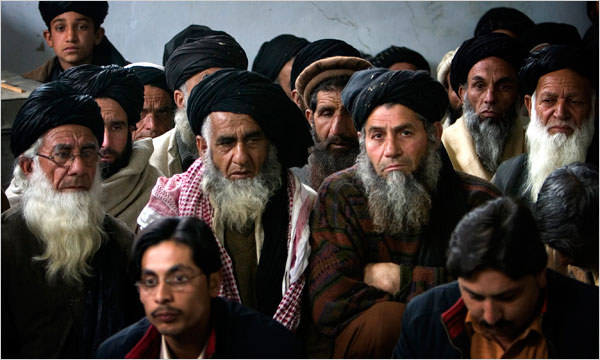 FRIENDS? FOES? Backers of a pro-Taliban cleric in the Swat Valley who signed a truce with Pakistan.

By HELENE COOPER
Published: March 7, 2009
HERE is a proposition that is bound to cut deep into the national psyche: Should the United States seek to negotiate with some of the same people who gave sanctuary to Osama bin Laden prior to the Sept. 11 attacks?

President Obama is sending an additional 17,000 American troops to Afghanistan, as part of his effort to try to put a tourniquet on the hemorrhaging war effort there. He has ordered a strategic review of United States policy there, and tasked a diplomatic behemoth — Richard C. Holbrooke, architect of the Dayton accords — to try to do in Afghanistan what he did in Bosnia. And he has, within days of assuming the presidency, taken ownership of the war in Afghanistan, with all of the Vietnam-era references to quagmire that come with it.

But a central point is hovering above all the strategic reviewing of “Afpak” (Afghanistan-Pakistan) that is going on in Washington, Islamabad, Kabul, London, Paris and Brussels. Any conflict that has ever been solved involved the various sides coming to agreement, and Afghanistan, the theory goes, is no different.

“I think it is clear that you have to have a political solution to Afghanistan, and I wouldn’t rule anything off the table, including conversations with some aspects of the Taliban,” said Reuben Brigety, an Afghanistan expert at the Center for American Progress.

It is a point that European — particularly British — officials have pressed on the Americans for some time. With the Bush administration, one European diplomat said, “there was a complete ideological block to the notion of coming to any kind of deals with anything that could be called the Taliban. But now,” the diplomat added, speaking on condition of anonymity, “we’re in a different ballpark.”

Indeed, last Friday, in an interview with The New York Times, Mr. Obama opened the door to approaching elements of the Taliban, if his administration’s review recommends it. He cited an argument he attributed to Gen. David H. Petraeus that “part of the success in Iraq involved reaching out to people that we would consider to be Islamic fundamentalists, but who were willing to work with us.” Mr. Obama added that “there may be some comparable opportunities in Afghanistan and in the Pakistani region, but the situation in Afghanistan is, if anything, more complex.”

That leaves the Obama administration still light years away from beginning talks with Mullah Mohammad Omar, who was the Taliban’s leader when it ruled Afghanistan on Sept. 11, 2001. These days, he has been accused of guiding commanders in southern Afghanistan from his base in Quetta, Pakistan, raising money from wealthy Persian Gulf donors, and delivering guns and fresh fighters to the battlefield, administration officials say. And even if the United States eventually opted for talking with Taliban members, it is more likely that those Taliban members would be talking to Afghan officials, rather than directly to Americans.

But there is a growing belief, particularly among experts who have been advising the Obama administration on Afpak policy, that it is important to peel away some lower members of the Taliban, in sort of a divide-and-conquer strategy. General Petraeus, the head of the United States Central Command, said last year that one element of the counterinsurgency strategy in Iraq that might be applicable in Afghanistan was outreach to what he has described as “reconcilables” among the insurgents.

Under that principle, Mullah Omar is not considered, at least at this point by the West, as “reconcilable.” But a local Taliban district commander might be.

Take Mullah Salam, a former Taliban commander who was persuaded by the British, with the aid of the Afghan president, Hamid Karzai, to cross sides in 2007. He remains ostensibly loyal to NATO forces, and some British officials mention him as an example of how a campaign to woo Taliban district commanders might work.

But it remains an open question whether Mullah Salam’s defection has helped or hurt the war effort. The British installed him as district governor in Musa Qala, in Helmand Province. Mullah Salam has since been the focus of complaints from the local populace; he is unpopular and corrupt, the locals complain, adding that he demands bribes and tributes from anyone who needs something.

“The key to winning back the population is to establish legitimate government,” says Clare Lockhart, a former adviser to the Afghan government and the co-author of “Fixing Failed States” (Oxford University Press). “If you give people a government with sufficient credibility — and basic jobs — you can win back their trust.”

But critical to winning back the population’s trust, many experts counter, is the absence of war. And getting to the absence of war may require making the American public comfortable with the idea that the Taliban might not necessarily equal Al Qaeda.

“There are multiple motivations for why these insurgents could be fighting,” Mr. Brigety asserts, suggesting that for some lower-level Taliban, the fight against NATO forces could emanate from something other than a desire to bring down the Afghan government or to defeat the United States.

One NATO official agreed in an interview, saying that some lower-level Taliban members attack coalition forces simply because, say, the foreigners didn’t ask permission before entering their valley. Or because a Taliban commander paid each Taliban member the equivalent of $20 a day to do so.

“More importantly, though, is there are fissures that could be exploited,” Mr. Brigety said, returning to the divide-and-conquer theme. “As long as we’ve adopted a position that all are our enemies, we could be missing an opportunity to exploit those divisions.”

That is actually the rationale that Pakistan’s government used to explain its recent and much-criticized reconciliation deal with local Taliban leaders in Pakistan’s Swat region. Pakistani officials have sought to reassure the Obama administration that their deal, which allows Islamic law and Taliban figures to hold sway in Swat, was not a surrender to the Taliban, but an attempt to drive a wedge between hard-core Taliban leaders and local pro-Taliban Islamists who might be wooed back to the government’s camp.

Reports from Swat indicate, however, that at least some parts of the once-popular tourist area are now being shunned by terrified former residents as accounts emerge of the torture and killing of an anti-Taliban figure who returned after the truce as well as the shooting of soldiers who didn’t alert the Taliban to their movements.

Last week, an editorial in the moderate daily newspaper Dawn strongly criticized the deal, linking an attack on the Sri Lankan cricket team in Lahore to the need for the nation’s two quarreling political parties to unite in a crackdown on militants, rather than negotiate with them. In effect, it said, the divided Pakistani government was being conquered, not the Taliban. “If the state resorts to negotiating with militants from a position of weakness, what we will get is disaster, across the board,” the editorial said. “The politicians need to wake up, bury the hatchet in the national good and rout the real enemy.”

Daniel Markey, a former South Asia expert at the State Department under President Bush, said that lessons learned in Iraq — where the Bush administration enlisted Sunni militias as allies by negotiating with tribal leaders — don’t necessarily apply in Afghanistan. “The tribal structure in Afghanistan is different than in Iraq,” he said. “There’s no clear hierarchy. If you make a deal with one guy, you have a deal with one guy, and not his whole clan.”